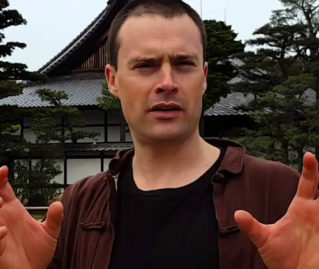 Dubbed the Norfolk Ninja or the Ninja of Norwich by the press Martin Faulks is Great Britain’s most high profile and controversial martial arts author. Indeed his demonstrations of mind over matter using the power of meditation brought him to the attention of the international press and have highlighted the potential of ancient mind sciences for healing, health, spirituality and self-development.

For Martin, martial arts are a path of enlightenment, discipline and self control. Their purpose being to develop the will, cultivate the body and to enable the individual to protect themselves and others.

He has a black belt in Japanese Ninjutsu (Bujinkan Budo Taijutsu) and the Korean martial art, Kuk Sool Won and is proficient in the spiritual disciplines of China, including Tai Chi, meditation, Qi Gong and the legendary form of Yi Jin Jing.

He is a four time national martial arts champion and a regional fencing champion.

Martin has traveled extensively and trained with some of the world’s most skilled martial arts masters, including such famous masters as Bo ou Mander, Grand Master Masaaki Hatsumi, Noguchi Sensei, Stephen K Hayes and Michael Pearce. He has also spent time in the mountains with the Yamabushi monks of Japan.